Employers in social services opt for creating a European structure 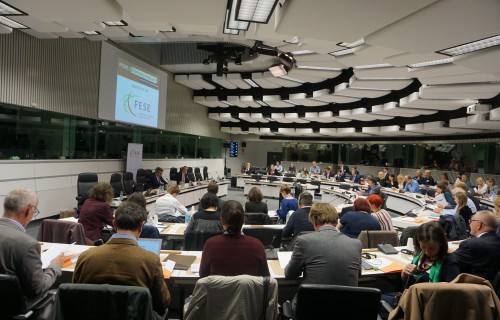 On 21st March, major Employers in Social Services from 6 European Union Member States launched a Common Declaration on the Contribution of Social Services to Europe. At both the European Parliament and the European Economic and Social Committee, the Employers presented and discussed their views that establishing European Social Dialogue structures for social services would be an important factor in taking full advantage of the opportunities the sector offers in terms of social cohesion, economic growth and job creation.

Social services employ over 10 million staff and are some of the biggest job creators in Europe today with over 1.7 million new jobs created since 2008. Social Services are understood as care and support services for older people, people with disabilities and children, as well as services to reach excluded and disadvantaged groups. The sector plays an essential role in contributing to social cohesion, sustainable and inclusive economic growth and job creation in Europe; yet they are yet to take an active part in European Social Dialogue structures.

The Common Declaration is the first joint position developed by recognised national Employers in the sector at European level and an important first step towards establishing a European Employers network for social services.

The Common Declaration provides a timely overview of the positive and essential contribution of the sector to the European Union. The leading message is the need for policy-makers to recognise in their policies the fact that “staff is the main asset in social services”.

Mr Luk Zelderloo, Secretary General EASPD, believes that “policy makers must wake up to the huge opportunities the sector offers in terms of social inclusion and job creation. These opportunities can only be fully taken advantage of if Employers are supported by adequate policies and funding to help them attract well-trained workers through decent jobs and career paths. This is not currently always the case”.

Developed by major Employers in Austria, Belgium, the Czech Republic, France, Germany and Spain, the Common Declaration argues that the creation of recognised social dialogue structures for social services at European level would be an important step in this regard. This would allow Employers and Employee representatives in the sector to lay down on the table issues of concern and to provide a space for a collective assessment of challenges faced. The structures would also allow social partners to negotiate and agree on common solutions affecting the sector and its workforce, and provide the sector’s social partners with an effective voice on European policy proposals and processes.

In addition to the request to support the development of social dialogue structures for the sector at European level, the Common Declaration also calls for a EU-wide strategy to support quality job creation in the social services sector; within the  competences established within the European treaties. Given the essential role social services play towards enabling access to social rights, the Employers expect the upcoming European Pillar of Social Rights to provide proposals in this regard.

Mr Jiří Horecký, President of the Czech Association of Social Services, confirmed that “national Employers have already started to work together to implement the Common Declaration by discussing the structures a European employers network for social services would take. We are very happy to join and expect to build on this important momentum over the next few months; including in a meeting with other Employers from Central and Eastern Europe in a few weeks time.

In strong cooperation with the PESSIS III partnership and the European federation of Public Service Unions (EPSU), EASPD will continue to facilitate this process in order to support the creation of social dialogue structures at European level for the sector.

Common Declaration on the Contribution of Social Services to Europe